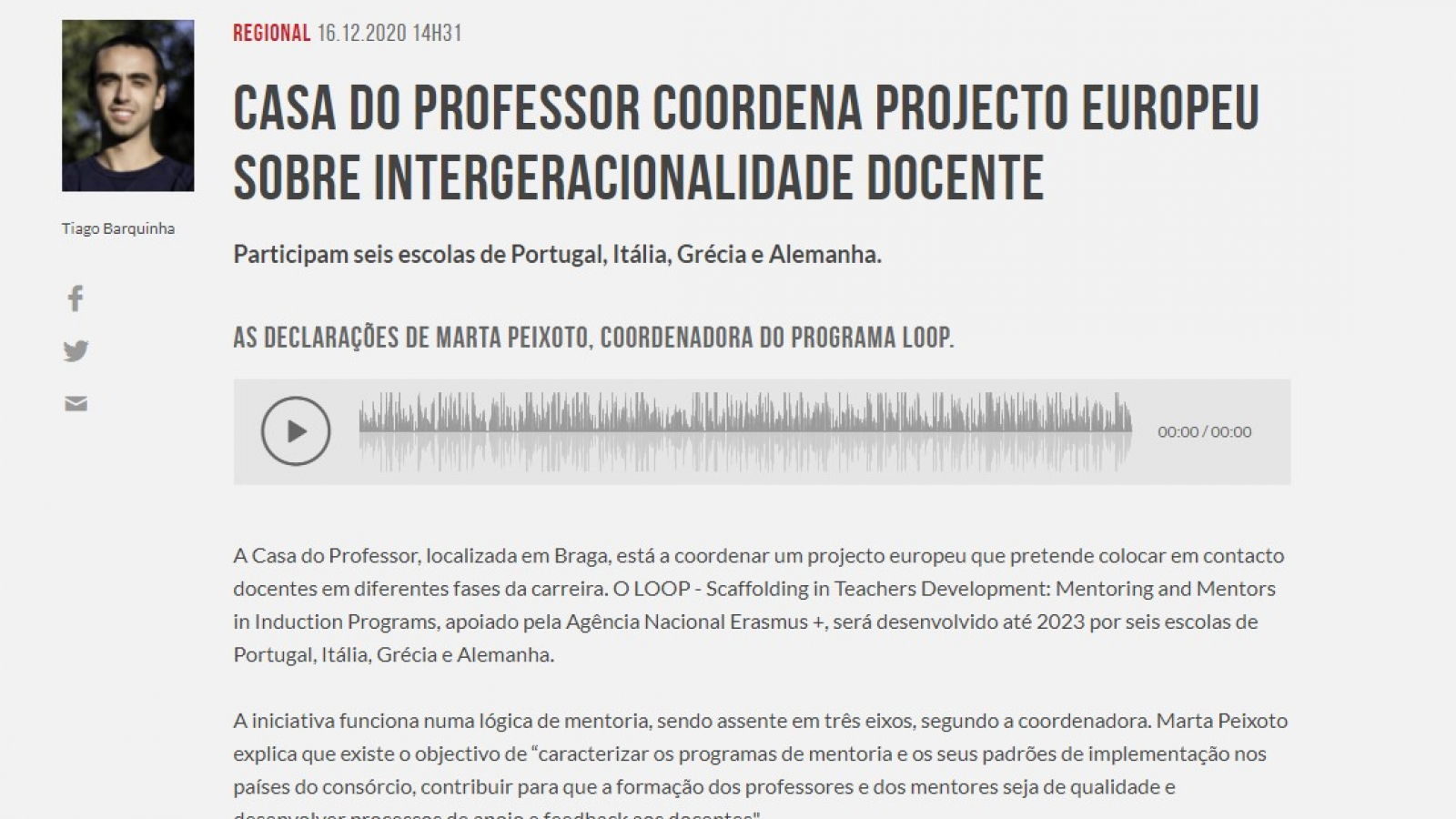 Casa do Professor, located in Braga, is coordinating an European project that aims to bring together teachers at different stages of their careers. LOOP – Scaffolding in Teachers Development: Mentoring and Mentors in Induction Programs, supported by the Erasmus+ National Agency, will be developed until 2023 by six institutions in Portugal, Italy, Greece and Germany.

The initiative works in a mentoring logic, being based on three axes, according to Marta Peixoto, from Casa do Professor, that explains that there is the goal of “characterizing the mentoring programs and their implementation patterns in the countries of the consortium, contributing so that the training of teachers and mentors is of quality, and developing support and feedback processes for teachers”.

Among the various activities, the head of the Pedagogical Innovation Center at Casa do Professor highlights the development of a kit of good practices and a training reference for mentors and teachers. The project will culminate with an international conference in Braga.

College João Paulo II, in Portugal, CESIE – Center for European Studies and Initiatives, the IPSSEOA Pietro Piazza School, in Italy, the Capodistriana National University of Athens and the 1st Peiramatiko Gymnasio Athinas Greece, in Greece, and the Carl School Center von Ossietzky, in Germany, are the project’s partner educational institutions.

In addition to the international dimension of LOOP, Marta Peixoto clarifies that “the national contexts will not be forgotten”, with initiatives developed based on the language of each country. The coordinator emphasizes that this type of program is “mandatory in all countries of the consortium, being regulated”. However, she warns that “they are not accessible”.

According to recent data from the National Education Council, by the year 2030, more than half of teachers, 57%, will retire. Other European countries, such as Germany, Italy and Greece, also have an average age of teachers higher than that of the OECD – Organization for Economic Cooperation and Development, which is 44 years.

This project was born, according to Marta Peixoto, from the “need to urgently make the teaching career more attractive”. Foreseeing “an even more complicated scenario” if the situation is not reversed, the head of the Pedagogical Innovation Center at Casa do Professor says that “above all, teachers who are beginning their careers and in mobility show enormous anxiety and willingness to give up”.